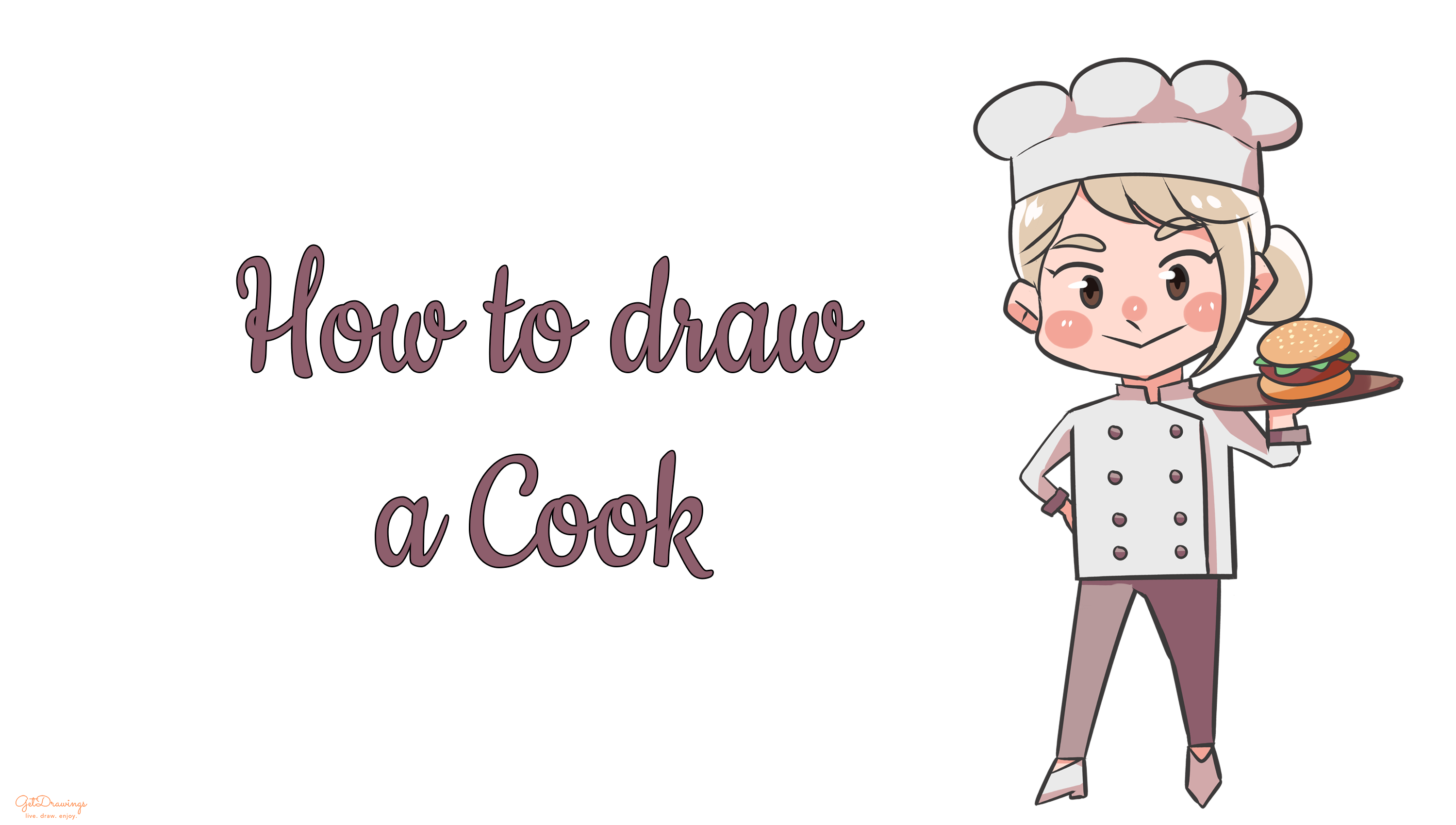 How to draw a Cook?

You obviously likes good food, right? it taste better when someone can cook it for you. Especially they made it professionally. Therefore, it’s a job for Cook to make a good food. If you want to make an art for them to appreciate their work, you can just take a look at these steps. Prepare a paper, a pencil and an eraser and we’re ready to draw!

Step 1   Firstly, We’re going to draw from top to bottom. Starting from the top, we’ll need to draw the head guideline first. Create a circle with two straight line that crossed each other on the center of the circle. Also, leave a big space below it for the rest of the body

Step 4    Now create its eyes by adding two arches above the horizontal line of the guideline and end it with a short straight line to make eyelashes. Lastly, add two ovals below it for the cornea.

Step 5    Add a curved line below the center of the eyes for its nose. Then, add two leaf-like above the eyes to make its eyebrows. Don’t forget to add her mouth by adding a short and long straight line (see picture to better understand).

Step 6    Moving on to its hair by adding the fringe first. You can start adding several curve lines like on the picture. Add another curve lines above the ears to define the head.

Step 7    Now add the bun on her hair next to the right-hand side ear by adding a curve line.

Step 8    Next is the cook hat. Add a large large arch on top of the fringe to separate the head and the hat. Also add two short straight line vertically to define the hat.

Step 9    Then, end the hat by adding several curve lines above the previous line (See picture). Don’t forget to add details such as several lines inside the hat.

Step 10   We can start to draw the cook’s body. By starting from her neck with two short straight lines below the head and another straight lines for the shoulder continuing the previous lines.

Step 11   Add 3 straight line to complete the body guideline just like on the picture that resemble square shaped-like.

Step 12  As for the arms, add several long straight lines and shorter lines (see picture to better understand). We’re going to make the arms as if the cook’s holding her hip while holding a tray.

Step 13    Moving on to the collar part, add several short straight lines on the neck and same goes for the hands (see picture).

Step 14    Next to the detail of the uniform, add short and longer lines inside of the uniform just like on the picture. Also add rectangle-like shapes for the sleeves.

Step 15    Now lastly we can draw buttons on the uniform by adding several circles.

Step 16    On to the next steps would be adding a narrow oval above the right-hand side hand for creating a tray for your Cook.

Step 17    Then, add a food like a burger by adding two smaller ovals above it for its buns.

Step 18    Next, add the topping in the middle of the buns like lettuce and the meat by drawing several curves with another big curve below it.

Step 19    We can continue to the next step by adding its legs. Draw several long straight lines below the body guidelines. (see picture to better understand)

Step 20    Lastly add several short straight lines for the shoes just like on the picture.

Step 21    Now we can finish it by erasing the guidelines and Voila! Your Cook is done!

Drawing is much more than marking lines on your paper. It’s a process which requires planning, idea generation, composition making ...
View all