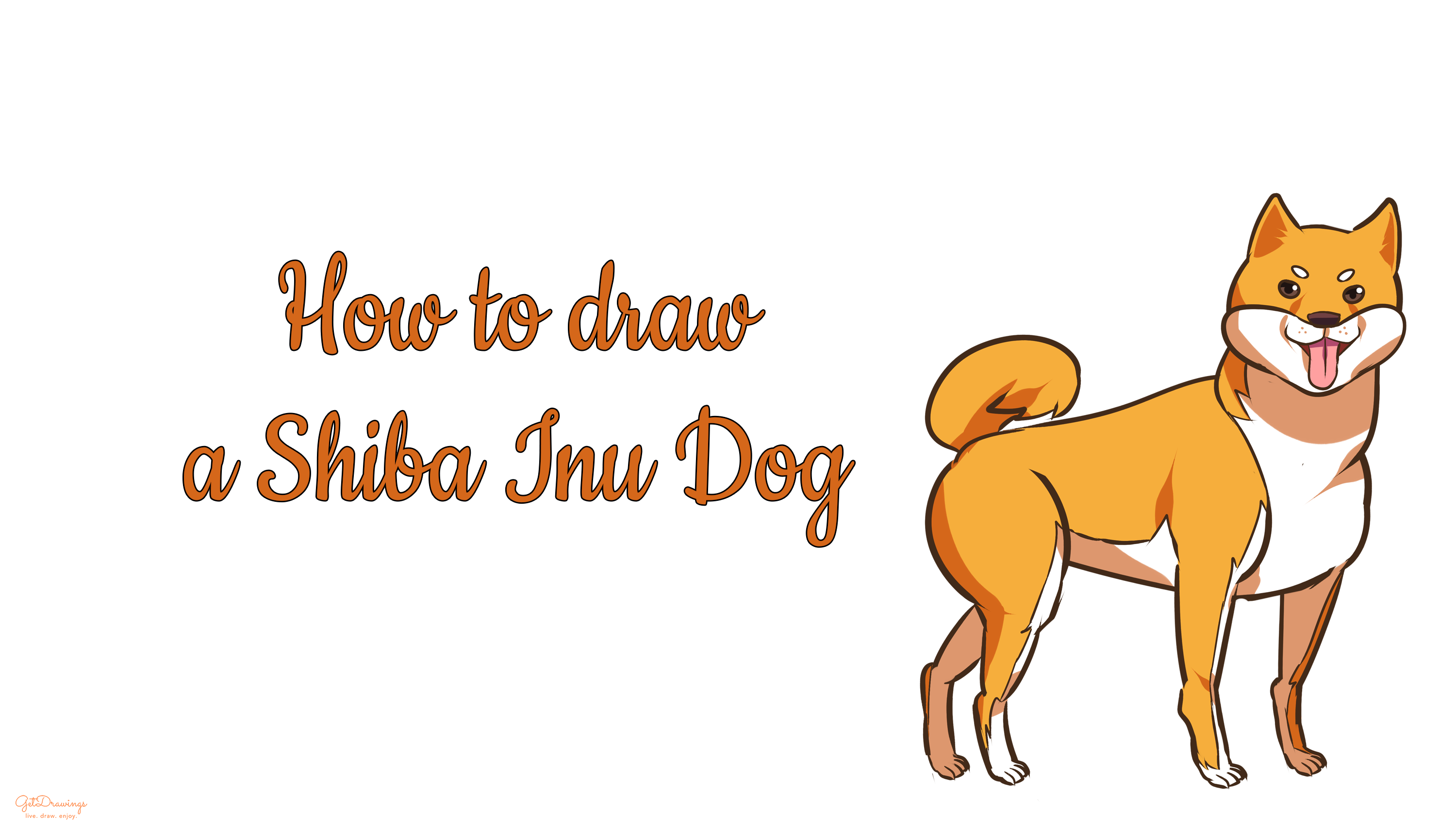 How to draw a Shiba Inu dog?

What do you usually think of when you see a dog? Do you want it to be your pet? A companion? Or to help you assist when you hunt? There is a small dog that was originally bred for hunting. One of them is Shiba Inu, a small and agile dog that copes with mountainous terrain. The origin of this dog is from Japan that has well-developed muscles. It’s a dog that usually has red fur and the name “Shiba” itself means brushwood in Japanese. It refers to a type of tree or shrub whose leaves turn red in the Fall. If you want to know how this dog would look like and how to draw them, you can follow these steps and prepare several things beforehand. You’ll need paper, a pencil and an eraser. Now you’re ready to draw!

Step 1: First of all, we’ll start by drawing the guidelines. The purpose of guidelines is to help you estimate the size of the head, body, and to guide you in drawing the rest of the body. Therefore, we’ll draw a small circle on the top right corner of your paper to make a guideline for the head of your Shiba Inu. Then, you can start creating its body by making a horizontal half chicken breast-like shape (see picture). Leave a space between the head and the body.

Step 2: Moving on to the next step. We add its neck and thigh of Shiba Inu’s leg. Starting from its neck, make two curve lines between the head and body guidelines (see picture to better understand). After that, draw an uneven oval on the left-hand side of the body guideline. The lower part of the oval must be shrinking a bit and the shape resembles a chicken drum stick.

Step 3: After the previous step, we’ll continue drawing its front legs. Now draw two smaller ovals on the left and right edges of the right-hand side of the body guideline. Especially it was placed below the neck guidelines.

Step 4: The guideline of your Shiba Inu’s front legs were already made in the previous step, therefore we’ll continue to draw the forelegs and back legs. Add two narrow ovals for the forelegs on the front. And create two narrow curve lines (see picture) for the back legs.

Step 5: In drawing the dog’s legs, this is the last part of the legs before its paws. Therefore create another curve lines for both front and back (see picture to better understand).

Step 6: Lastly, the legs wouldn’t be complete without drawing its paws. Create several curve lines to make paws on the front legs and back legs. Paws usually consist of four curve lines. Therefore, create four curve lines on each leg.

Step 7: After finishing the legs, we’ll continue with its ears and tail. Shiba Inu has short ears, therefore, draws two curvy triangles. Also, since its tail is curvy, well draw the guideline first for its tail. Therefore, create a curve line on the left-hand side of the body guidelines. Shiba Inu tends to have white fur on the lower part of its face. Therefore, we’ll separate it by creating a wide and curvy hearts shape on its lower face.

Step 8: Let’s start with the detail! Especially the detail on your Shiba Inu’s face. Start by making its eyes, nose on the center of its snout and its tail. You can draw it by making two small circles above the snout for the eyes. As for the nose, create an inverted small trapezium with curved edges. Lastly, add several curve lines and spikes that resemble Shiba Inu’s tail (see picture).

Step 9: Next, we can move on with its mouth. Create several curve lines (see picture to better understand) to make the shape of its mouth below the nose. The line must be touching the lower part of the nose. Then, we’ll need to add a feature of Shiba Inu that we often see. It’s Shiba Inu’s wide smiles with its tongue hanging around. Therefore, you’ll need to make a curve below the mouth to make the tongue. Then, add several short lines to complete its smile (see picture)

Step 10: If there’s a line that intersecting each other, this is the time to erase it. To see your Shiba Inu, you’ll need clean lines Lastly, giving the detail for the body and face. Since Shiba Inu has a white area too on its body, especially the center of its lower body, from neck to inside of the legs. Therefore, create several lines to separate the color (see picture to better understand). Also, Shiba Inu’s face usually has two white spots above its eyes. You’ll have to draw to small ovals above its eyes Voila! You’ve finished drawing a Shiba Inu! More dog clip arts find here.

When drawing a dog, the most important part is to look at the reference. How’s the actual shape of its body, the detail, the ears, etc. This is important because living things’ form won’t be smooth or symmetrical. Even if it’s symmetrical, the form will still be uneven. Therefore it’s important, especially drawing the body. You’ll need keen eyes and a lot of practice so you can make your drawing perfect. Good luck!

Do you like drawing? Are you an artist? Have you always wanted to share your art with other people or ...
View all