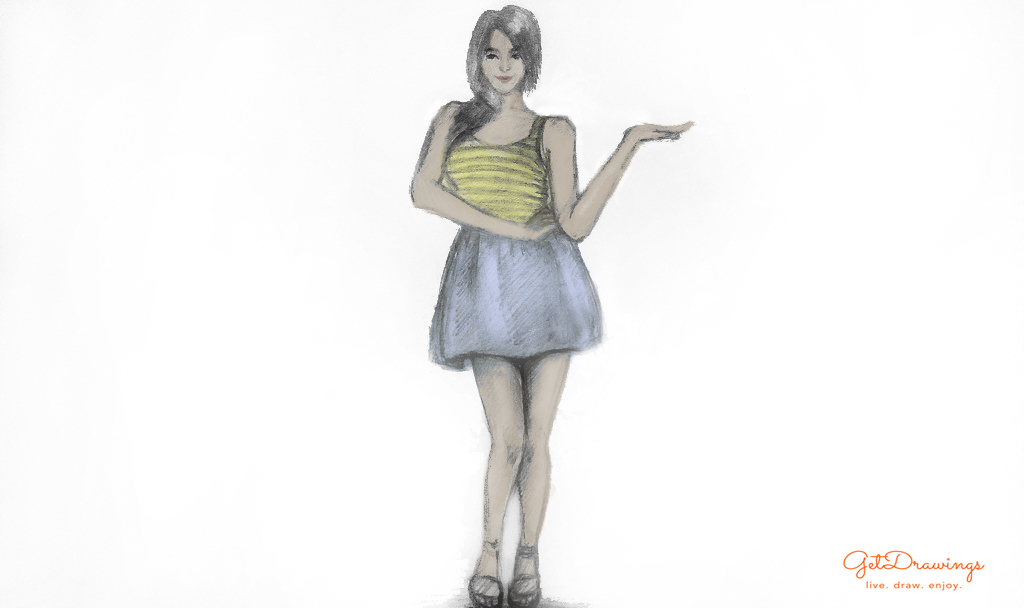 How to draw a Girl?

Girls and boys have cardinal differences in the structure of the body. But, in the modern world, some women look like men in appearance, because of their clothes and hairstyles. However, no matter how a girl does not try to be like a man, we can still recognize her. The main distinguishing feature is the structure of the body of a woman - it's wide hips and narrower shoulders (in men exactly opposite indicators). When drawing a girl in full height it is worth to build on this basic rule, and other secrets of the drawing can be learned from step-by-step of this tutorial.

Step 1. First of all, you need to draw a vertical line with a simple pencil. At the edges of the segment, we leave the notches. They will determine the total height of the body for which you can not go beyond:

Step 2. Divide the segment in half. In this way, the line is divided into two parts, according to which later we will build the body. Next, the upper segment is again divided in half, and from the resulting upper segment we measure another half. The uppermost segment is the height of the girl's head:

Step 4. Next we need to know the location of the waist and knees. To do this, divide the center line into three parts. To make this easy, the bottom half of the centerline is divided in half, but the line of the knees will be slightly higher. We measure its height and transfer it to the center line three times, leaving the notches. As a result, there should be three equal parts:

Step 5. Now draw a line of waist. It will be located on the notch between the first and second half of the divided center line (there are 3 parts in all), and the hips are slightly lower and twice wider than the waist. Hips and waist are drawn under the slope, opposite to the shoulders:

Step 6. We unite the shoulders and waist around the edges, and from the waist we draw the line to the hips. It is necessary to outline the length of the skirt - it will be equal to two distances from the waist to the hips:

Step 7. From the shoulders outline the location of the hands. The left arm will be bent at the elbow and is at the waist level, and the right one is raised and assigned to the aside:

Step 8. Now draw the legs. Do not forget that the knees should be located at the level of the notch. The right leg will slightly go behind the left:

Step 9. Draw the head in the shape of an oval, and on the head we will outline the hair. Most of them will fall to the left:

Step 10. Draw the hands and give them a shape. The girl's left hand will be held at the waist, and the right one is set aside:

Step 11. Next, we will draw a woman's clothes. She is dressed in a striped T-shirt and skirt. We will outline the bends and folds on the fabric:

Step 12. The eraser removes unnecessary lines that were previously needed for construction. Strengthen the contour of the woman's body:

Step 13. Let's paint the features of a girl's face. We do not make a strong emphasis on drawing the face, because our main task is to learn how to draw a girl in full height, namely, the body:

Step 14. We set the tone for the hair. Around the bends make the pencil strokes denser:

Step 15. Now we will draw the upper part of the girl's body: hands, chest and face. On the shirt we draw a strip:

Step 16. The skirt will be dark, so we make the tone like hair:

Step 17. Next, draw the legs. We apply the strokes on the bend of the legs. On the lower part of the legs (under the knees) the tone is made slightly darker:

Step 18. Remains the last step. We add contrast and select the contour of the body. Finalize the missed steps. The drawing is ready.

At first glance, the drawing of a girl in full height seems very complicated. And you can not disagree with this, because building a body is not an easy task. Now you need to consolidate your knowledge with a constant practice, so you can always come back to this tutorial and study again.