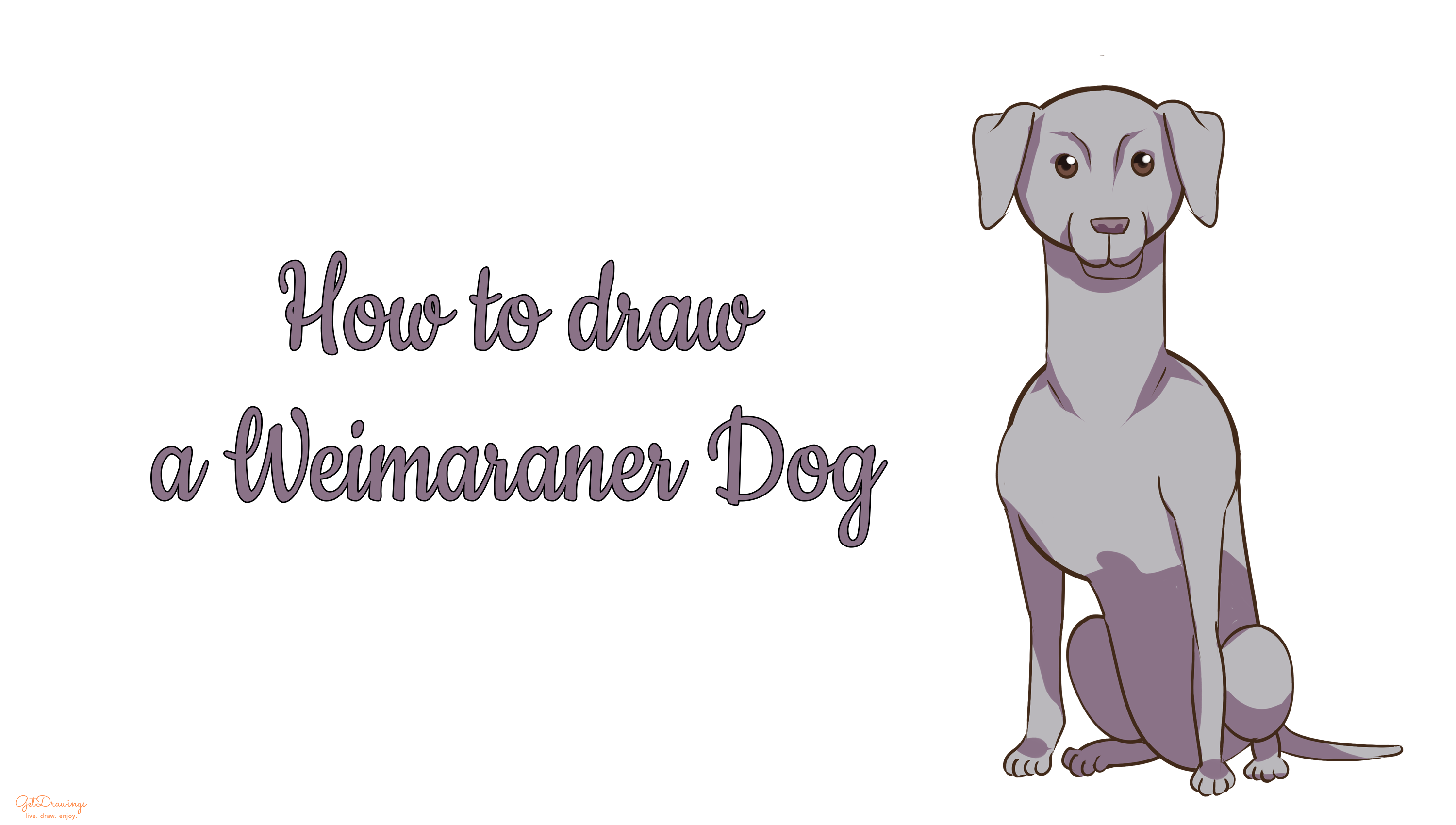 How to draw a Weimaraner dog?

What do you usually think of when you see a dog? Do you want it to be your pet? A companion? Or to help you assist when you hunt? In the early 19th century, there is a large dog that was originally bred for hunting. One of them is Weimaraner, a gun dog that assists the hunter in finding and retrieving small animals like birds. The origin of this dog is from Germany, which usually height around 22-28 inches. It’s a dog with a lanky body and long limbs that have grey fur. If you want to know how this dog would look like and how to draw them, you can follow these steps and prepare several things beforehand. You’ll need paper, a pencil and an eraser. Now you’re ready to draw!

Step 1: First of all, we’ll start by drawing the guidelines. The purpose of guidelines is to help you estimate the size of the head, body, and to guide you in drawing the rest of the body. Therefore, we’ll draw a small circle on top of your paper to make a guideline for the head of your Weimaraner. Then, you can start creating its body by making a bigger circle below it. Leave a space in between the head and the body, since Weimaraner is a dog with a long neck. Then, for the belly part of the body, just draw a long curve below the previous circle (see picture to better understand).

Step 2: Moving on to the next step. We’ll start from the top to bottom. You can continue drawing the guideline of the head by adding snout. Since the Weimaraner we’re drawing is facing to the front, we’ll draw the snout with a smaller circle on the lower part of the head guideline. Then, finish the snout with a smaller curved line below it. After that, we can continue connecting the head and the body with the neck. Create two straight lines below it with the same length. After that, we can continue drawing its thighs by creating two small ovals below the belly.

Step 3: After the previous step, we’ll continue drawing its front legs. Now draw two smaller ovals on the left and right edges of the top body guideline. As for the toes of the back legs, draw two horizontal ovals with different lengths (see picture).

Step 4: The guideline of your Weimaraner’s front legs were already made in the previous step, therefore we’ll continue to draw the forelegs by adding uneven lines (see picture to better understand).

Step 6: After finishing the legs, we’ll continue with its ears and tail. Weimaraner have long ears, therefore, draw several curve lines that resemble uneven inverted triangle-like shapes. Since Weimaraner is usually seen as a short-haired dog, we’ll draw its tail with a docked tail. Therefore, create an uneven narrow curve line on the right-hand side of the right thigh.

Step 7: Let’s start with the detail! Especially the detail on your Weimaraner’s face. Start by making its eyes and nose on the center of its snout. You can draw it by making two small circles above the snout for the eyes. As for the nose, create an inverted small trapezium with curved edges.

Step 8: Next, we can move on with its mouth. Create several curve lines (see picture to better understand) to make the shape of its mouth below the nose. The line must touch the lower part of the nose.

Step 9: If there’s a line that intersecting each other, this is the time to erase it. To see your Weimaraner, you’ll need clean lines

Step 10: Lastly, giving the detail for the body and face. Since Weimaraner is a lanky dog, draw several lines for its nose and front legs (see picture) to show how lanky its body is. Voila! You’ve finished drawing a Weimaraner!

When drawing a dog, the most important part is to look at the reference. How’s the actual shape of its body, the detail, the ears, etc. This is important because living things’ form won’t be smooth or symmetrical. Even if it’s symmetrical, the form will still be uneven. Therefore it’s important, especially drawing the body. You’ll need keen eyes and a lot of practice so you can make your drawing perfect. Good luck!

If you have some experience in drawing or you have been practicing this amazing art for a long time you ...
View all