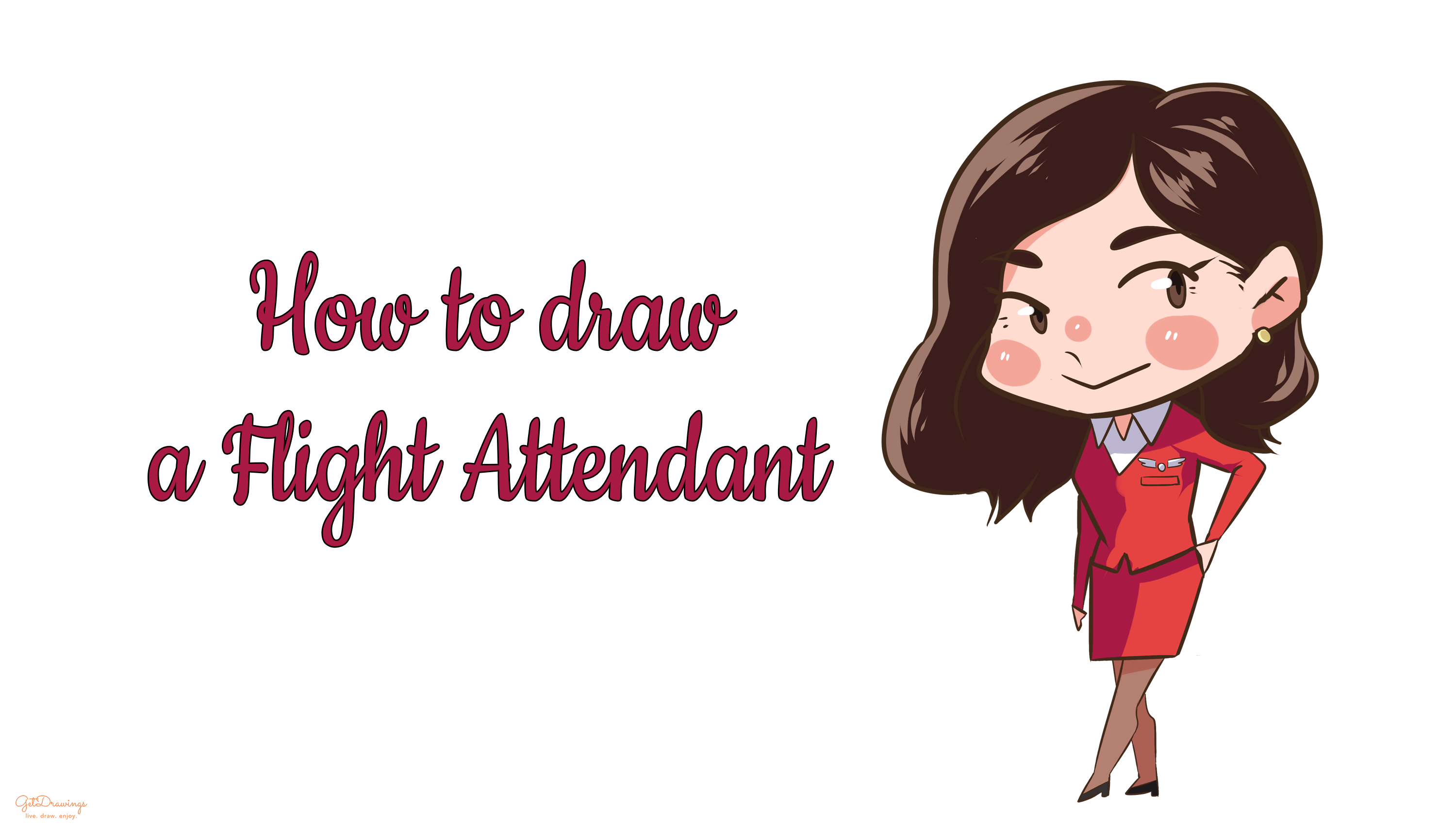 How to draw a Flight Attendant?

When we’re on a plane to our destination, these people are always here to provide us service such as food, explaining safety, and help us when we need them. It’s none other than Flight attendants. They greeted us the first time we arrived at the plane and provide the best service above the skies. If you admire Flight attendants and would love to draw them, You’ll need to prepare a paper, an eraser, and a pencil. Now, we can start to draw!

Step:
Step 1    Firstly, we’re going to draw from top to bottom. Therefore, we need to start drawing a circle at first with two straight lines that crossed each other inside the circle. This will be the head guideline. Don’t forget to leave a space below it for the rest of the body.

Step 3    After that, add a curved line on the right-hand side of the head guideline to make an ear. Then add two short straight lines (See picture) to give a depth inside the ears.

Step 4    Now create its eyes by adding two arches above the horizontal line of the guideline and end it with a short straight line to make eyelashes. Also for the side-lower lashes, draw several short straight lines below it. Lastly, add two ovals below the arches for the cornea.

Step 5    Add a curved line below the center of the eyes for its nose. Then, add two leaf-like above the eyes to make its eyebrows. Don’t forget to add her mouth by adding two straight lines touching each other (see picture to better understand). Also, you want to draw her earrings by creating a circle below the ears.

Step 6    Moving on to its hair by adding the curvy fringe first. You can start adding several curve lines like on the picture.

Step 8    Now we can move on to create the body line. Firstly we’re going to draw her torso. Add several short and long straight lines to make a shape just like on the picture. Flight attendant tends to wear their uniforms really neat. So we want to draw the uniform that suits her body shape.

Step 9    As for the arms, add several long straight lines and shorter lines (see picture to better understand). We’re going to make the arms as if she is holding her hip.

Step 10    Then draw the hands on the edge of the arm like triangles to simplify it. Also to make the collar and the detail of the suit, draw reverted triangles just like on the picture.

Step 11    Then add details such as badge and pocket. For badge, draw a small circle inside the hat and wing-like shapes next to it (see picture for better understand). Then for the pocket, you’ll need to add a small and narrow rectangle shape below the badge.

Step 12    After that, we can start drawing her skirt by adding several straight lines that resemble reverted trapezium.

Step 13    Moving on to her legs and feet. You can draw several curve and straight lines and add a short straight line on the feet to give detail for the heels.

Step 14    Now we can finish it by erasing the guidelines and Voila! The Flight attendant is done!

In drawing Flight attendant, you’ll need keen eyes to draw the details. Therefore, drawing guidelines at first is an important step. It is not going to be easy at first if you’re not used to drawing. Since no one can be a good artist at their first attempt. But as long as you keep practicing in drawing, you’ll be good in no time.

Practicing and making a numerous number of sketches are one way to improve your drawing skills. But if you feel like ...
View all