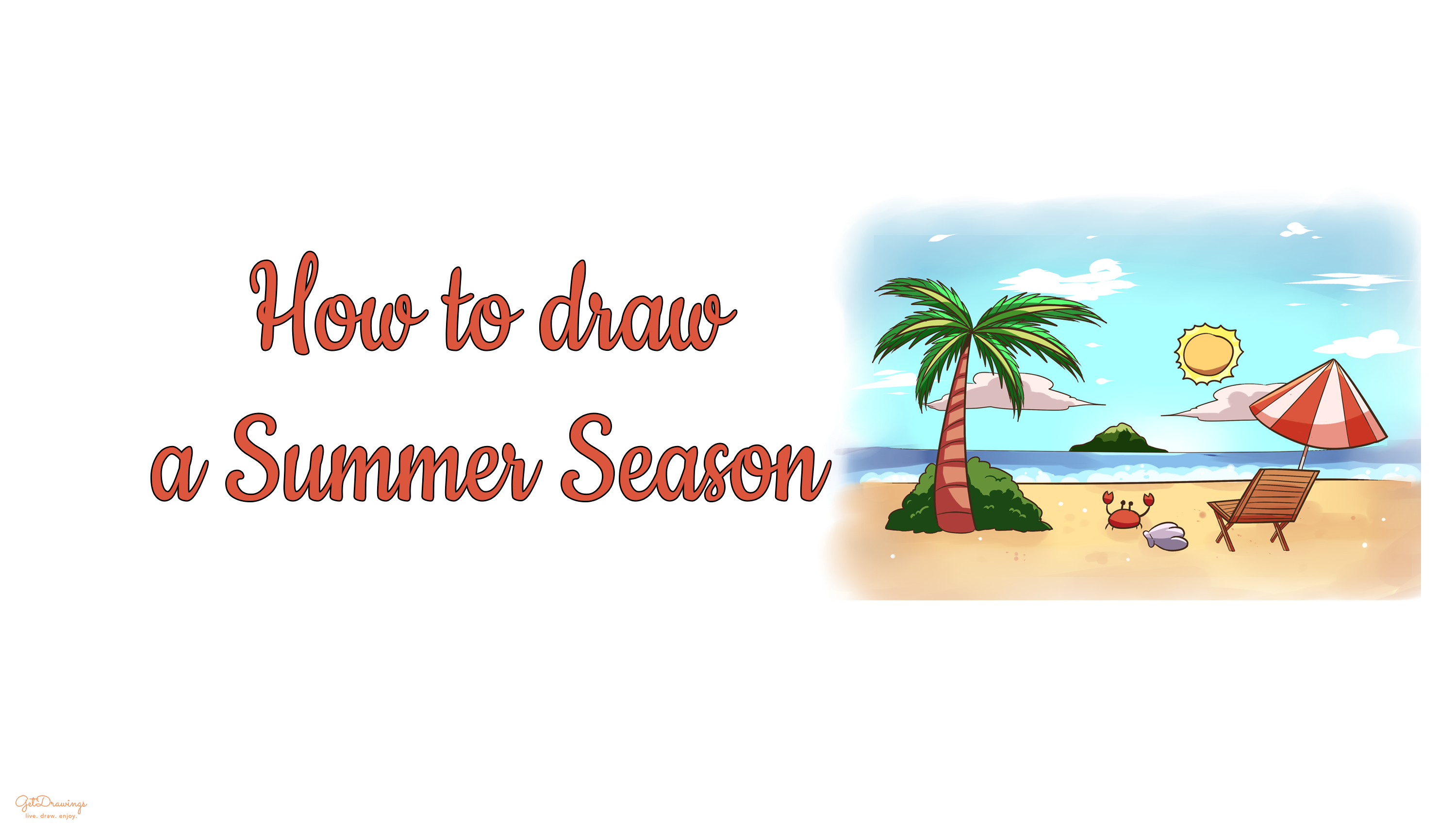 How to draw a Summer Season?

What describes a Summer Season? Is it Beach? The heat? Sea? Summer is identical to relaxing at the beach. People tend to go to Beach since the weather tends to be hotter than the rest of the seasons. They seek for a breeze or to beat the heat by either swimming at the sea or playing with water. At the beach, you’ll also see creatures that live inside or around the sand. Therefore, if you really want to portray how the Summer season would look like, you can follow these steps and prepare several things beforehand. You’ll need paper, a pencil and an eraser. Now you’re ready to draw!

Step 1: Starting with the tree that we can usually see at the beach which is a coconut tree. We’ll draw the main part first which is the tree trunk. Create two long and slightly curve lines with the same direction on the left-hand side of your paper.

Step 2: Moving on to the leaf part. We’re starting to draw the branch first. Add several curve lines (see picture to better understand) around the top of the tree trunk. Don’t forget coconut trees tend to have horizontal lines texture around them, therefore add several short curve lines inside the tree trunk.

Step 3: Then continuing the previous step by drawing its leaf. Make spiky curvy lines around each branch on both sides (see picture).

Step 4: After that, we can move on to another part. Around the coconut tree, there’ll be bushes. Therefore, draw several curvy and bumpy lines (see picture to better understand).

Step 6: For the next step, we’re starting to draw the creature around the beach that we can see strolling around the beach. Now we’ll be drawing a crab. Start from a horizontal oval on the center of the land. Then add several short lines for its legs, the crab’s carpus, and the line below the eyes. As for the crab’s eyes, add two tiny circles above the previous line that was made beforehand.

Step 7: Then continue by drawing the crab’s claws above the carpus line. Also, moving on to the next creature which is a clam. It consists of several curvy lines (see picture) that make a clam shape.

Step 8: Now we can move on to the next step. We’re going to draw the chair that usually appears on the beach which is a folding beach chair. Start by drawing a parallelogram on the right-hand side of the paper. Next, to the previous shape, add a triangle shape to finish the base of the chair.

Step 9: Moving on to the details of the chair. By adding several lines inside the previous shapes and then we also need to add the legs of the chair (see picture to better understand). Make the legs crossing each other to make it balance.

Step 10: After that, we’re moving on to the next stuff that usually next to the chair which is parasol. We’ll start by drawing the pole. You can create two straight lines next to the chair.

Step 11: Then, continuing the previous step by adding a large triangle-like shape above the pole to make the cover of the parasol. But on this triangle, make the bottom of the triangle to curve. Don’t forget to add the details such as several lines inside it to create a pattern for the parasol.

Step 12: On to the next step, we’re going to create a mountain in the middle of the island across the current land we’re drawing. Start from making several longers and short straight lines (see picture) above the horizontal lines.

Step 13: After that, continue to another part of the beach by adding clouds. We can draw it by making several curve lines (see picture to better understand). I’ll be making two clouds around the mountain.

Step 14: Now you’re finished with the previous step, we can continue on to the next step. The next step would be drawing the sun. Starting with a giant circle with the same height as the tree branches.

Step 15: To make the sun is shining brightly, we can draw several curves that resemble spikes around the circle. Also, try to make the spikes uneven to make it more dynamic.

Step 16: Lastly, if there’s a line that intersecting each other, this is the time to erase it. Voila! You’ve finished drawing scenery of the Summer season!

Since you’re drawing a scenery, you need to look at the actual reference of what you’re going to draw. It is important because living things’ form won’t be smooth or symmetrical. Even if it’s symmetrical, the form will still be uneven. You’ll need keen eyes and a lot of practice so you can make your drawing perfect. Good luck!

Drawing is much more than marking lines on your paper. It’s a process which requires planning, idea generation, composition making ...
View all